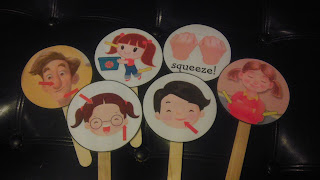 Every primary worker, regardless of the specific calling, has had the difficult task at some point of reigning in the terror that is child chatter.  This can be irritating, stressful, and sometimes overwhelming, especially if your primary group is gigantic.  Child chatter can be the result of sugar (think every single holiday), excitement (think every single holiday...again), hunger (think every possible church block), boredom (don't blame yourself), or rebellion (blame the parents - it ALL comes from the home!).  There are several different ways to shush the chatter and bring the kids back to your good graces.  Here is one idea for you, inspired by someone somewhere who posted this lovely little poem:

FANTASTIC!!  What a brilliant way to get the kids' bodies moving and brains engaged, all with a little reverent twist.  It's all about tricking them into being quiet!  I made this set of visuals to help those of us that would end up twisting up all the words and end up with pretzel children.  Easy enough - just print out the following PDF's:

Cut out the words and paste them to the back of the corresponding visual.  You can put them on popsicle sticks like I did, or just leave them as circles; whatever is easier for you.

No Time? No Supplies? Check it out...